Three and a half tonight in some really awful humidity. No doubt it will be this bad on Sunday morning when I run the East Bay Half Marathon, but I'm hoping to dial in a steady pace and finish that half in about two hours. I'm treating it as a long run, as I would really like to peak for my Jamestown Half Marathon at the end of September.

I'll be running a smaller local marathon in late October, so I'm not focusing as much on the marathon right now, but obviously I will do some longer runs in September to get me ready for the distance. 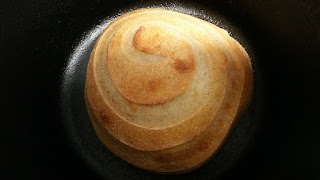 Another long day at work today getting ready for the busy season. It was very, very warm but we still pushed on. Came home and took a good little nap before going out with some friends. Somewhere in there I also made a loaf of sourdough bread that I had in the fridge overnight. Took it out, let the yeast wake up, and gave it a quick shape-up just to make sure it held. I wouldn't say it came out perfectly, this starter is having a semi-dormant period so the yeast isn't exactly where I want it yet but the smell, flavor, and end result looks pretty good. Much easier cooking the loaves in the dutch oven, too.

Someday my kids can look back on this blog and wonder how I could blog this much about cast iron cookware, baking bread, and running.
Posted by Mike at 10:58 PM

Email ThisBlogThis!Share to TwitterShare to FacebookShare to Pinterest
Labels: Summer2016RunStreak