I ran my 6th marathon yesterday.

The night before I was surprised at how lightly I took the prep. Did all the food stuff I thought was appropriate, but I didn't pack/unpack/repack/unpack/pack my gear the way I did for the Eastern States. I trusted that I knew what I was going to need for the race, so I sort of put my stuff together in the kitchen, with my pack, and headed off to sleep. Woke up a bunch of times throughout the night but took a couple of sips of electrolyte drinks, and then went back to sleep. Ended up with about seven hours sleep total, so not bad.

Woke up at about 4 am, and then set about getting ready and prepping my pre-long run meal of poached eggs and polenta. Didn't have any coffee in the house, so I planned to stop on the way. Got dressed, packed all my stuff. My experience was so good with the bag check and having dry clothes to change into at the Eastern States that I decided to avail myself of the lockers that were going to be in Newport.

Left the house at about 515 am for the forty minute drive south. Stopped by the convenience store in my house, and stood at the door half asleep for a few minutes before noticing the "door out of order, please go around" sign. That amused several of the other folks at the shop. Got some coffee, back in the car to head down to the island. The drive wasn't too bad, but I noticed hiccup number one as I drove over the Mt. Hope Bridge. The sun was clearly visible, and it was obvious to me that the clouds would burn off. Wouldn't have bothered me except I didn't have sunblock on me, and all the shops that sell it were closed that time of morning. Also, I had a long sleeve shirt on and knew I was going to cook in that sun. I'd also forgotten my running cap, so that was going to make things interesting. I knew that the race organizers usually sold gear, though, so banked on being able to buy a cap from them.

Arrived at the parking lot, had my polenta and eggs, changed out of my pajamas, and headed over to the shuttle. Once the shuttle pulled out, I realized I'd left my coffee and supplements back in the car. We'll call that hiccup number two.

Arrived, shuttled to the start. Used the porta-johns while the line was short, then got in line for bib pickup. Maybe ten people in line for bib pickup. Got my stuff and picked up a trucker hat (hey, better than nothing.) Also noticed that one of the race sponsors was a yerba mate company giving out free cans of mate, so I had some of that. So, overall, not having my coffee or my hat from home ended up working out OK. I started looking around for the locker company.

Several of the other runners were roaming around looking for the lockers, too. No one seemed to know where they were, and some of these folks had paid in advance for lockers, so they were rightly annoyed. I wasn't jazzed about buying a locker to begin with, and I wasn't surprised that the race organizers shortly setup a bag check because we all had bags. I decided to keep my lightweight jacket on so I'd have pockets that could fit my wallet and car keys, not wanting to leave them in the parking lot. Also, it was a little chilly at that point and I reasoned that I could tie it around my waist if I had to.

Race started at about 7:30, and I started the tracking on the phone, my GPS watch. I was listening to Scott and Jenny Jurek's new book North as I ran. My wife and I followed their Appalachian trail event a few years ago, and I was really excited to get the book a couple of days ago. I'd been saving it just for this race.

I decided given the hiccups I'd had that morning, I was going to do my best to run a smart race for me, aiming to stay between 8:30-9 minutes/mile for at least the first twenty miles. I also knew from friends and family who had run newport before that the last 10km were rolling hills, so I wanted to make sure I had something in the tank for that. I ended up mostly meeting my goal for about the first 18 miles. I had so much fun running at my own pace by the ocean, and just absolutely loving the day.

By the time I got to mile 18, though, heading towards Sachuest point and then around the hills, I was starting to lose it. The sun was beating down hard, and I'd forgotten to clean my water bottle by hand after running it through the dishwasher. The downside of this was that the water I had been carrying on me tasted like soap, so I'd been stopping at the aid stations to get a sip of water maybe every other mile. It's a little thing but it certainly hurt my morale a bit.

By the time I hit mile 19 I knew I was going to need to work in some smart walk breaks, because the hills were chewing me up and I was cooking in the sun. I was still trying to keep my splits around 10 minutes per mile, but admittedly fell short of that goal a couple of those miles. 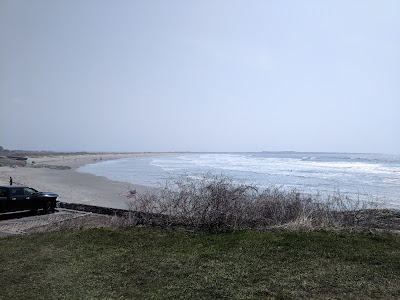 I walked the last big hill heading up looking out over the beach, and snapped a photo. The hill was a pretty good climb, and that late in the race I just didn't have it.  It occurred to me that I probably haven't done climbing like this since Big Sur. The total elevation on the course was about one thousand feet, so, less than half the elevation gain of Big Sur, but so much more climbing than I'm used to doing. I usually cover about 1,500 ft of elevation gain over a week. I was doing about that in one day.

I was worn out in that last 10km, sure, but I was also comfortably moving under my own power, and way ahead of my time from NYC last fall. I saw a couple of runners who had already finished, and they immediately started cheering me on, so I headed off towards the finish line at an easy lope. I came through the chute at 4:02, 37 minutes faster than my time at New York.

I went to grab my stuff, and found that while there were volunteers, they weren't really interacting with anyone taking bags. I was very happy in that moment that I kept my wallet on me.

Overall I felt pretty good about my performance at the race, on a tough course, in conditions I wasn't dressed for (I'd have been better off with a singlet, honestly.) I was disappointed at how the race organizers felt unprepared with the locker mishap, the registration line becoming so massive, etc. Overall I'm not sure that I'd ever run this particular marathon again, but I'm glad that I did it at least the once. I'm certainly not done with the distance, and I'm confident that a PR is well within my reach if I pick the right course, get good conditions, and of course put in the training.

I also have a new pair of sandals my wife and daughter got me as an early father's day gift. The soles are thicker, and very comfortable so they were great for after-race. I was moving pretty well post race, owing to my decision to take it easy in the last 10km. We went out for ice cream, then picked up dinner, and I slept for a good 8 hours, without much difficulty in lowering my heart rate.

Next month I have a half marathon, so I'm excited to get back out on the race course.
Posted by Mike at 10:19 AM No comments:

I wax and wane with Orion
onward on foot, up hills with great stride
metal-forged legs from the heart of winter
ready to embrace the ease of warm weather
and a new kind of suffering

As I approach the end of my training cycle, I find that I'm mentally ready for this race. More than any marathon I've prepared for, I think, save for maybe the first marathon I ran where I was over-prepared. I'm at a point in my life where I'm confident in my ability to cover the distance, and I've had a good training cycle.

I dropped some workouts. That's not uncommon for me, but I made sure to run at least three times a week. So, in each week I still had an easy run, a workout, and my long run. That's pretty good for me, where I think in the past I've lost one type of run in a week, and this time I've held it together a bit more. In the heavier weeks I managed to cover 40-44 miles, with a couple of twenty mile runs in there including the Eastern States. So that's there to building my confidence base.

Also, I'm down about ten pounds. I continue to weigh myself every morning, so of course there are fluctuations, but generally speaking I'm down ten pounds. I'm hoping to drop another ten over the summer and into the fall, because I know I felt much better running wise at around 160. There will obviously be challenges in there, with the birth of baby #2 and a super active, very intelligent toddler in my life, but I'm still optimistic.

Family-wise I'm not sure that my wife and kiddo will be able to come to the marathon. My wife has been exhausted from the pregnancy, and she certainly has earned some time off her feet on Saturday. I'm a little sad at my daughter not seeing me finish marathon #6, but, she was there at my second run at Baystate, she was there at NYC. I also know there will be many more races in my future, so certainly it won't be something she'll miss out on too much. I might also take a trip to the zoo with her the day after this race, so we'll see how that goes.

Currently the weather for Saturday is 57 with some clouds and a light wind (knock on wood.) That would be amazing conditions for the race, but gives me a little bit of caution only because I've been training in conditions much colder than that, so I'm more accustomed to running in tons of gear at this point. Guess I'll have to pack a couple of outfits.
Posted by Mike at 5:57 AM No comments: