Winter is tough. Living in New England, I'm used to a fairly long and cold winter with lots of variation. It still never manages to throw me off that December is really not that bad of a month (usually) or that January can even have some unseasonable days. It makes my annual holiday run streak fairly easy, temperature wise. It makes training for a spring marathon a whole other thing. 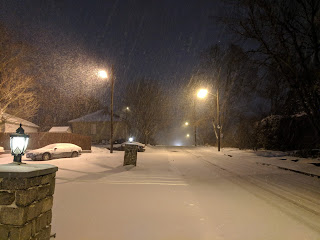 I've gotten good at identifying a couple of patterns in myself. I reach the end of January, am fully done with winter, and expect to move on. February hits, and we usually get a couple of decent snows, and I'm totally sick of it. February is a short month that feels super long because of the cold.

Nothing to be done for that, of course. I can't control the weather. But I have to do some stuff to shake me out of stale and old habits, and to keep me from going completely stir crazy in the winter month ahead. 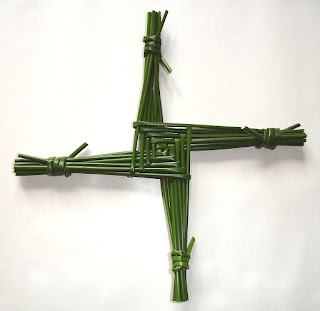 Decided to put some real effort into an early spring cleaning after researching some ancient Pagan and Celtic traditions around Imbolc / St. Brigid's Feast. Typically cleaning is a big part of the holiday. Not really affiliated with any specific ideology, I set February 2nd as my goal time to revamp the house for spring, put away the Christmas Tree (finally) and started my marathon training in earnest. Spent quite a few hours yesterday cleaning the living room, kitchen, rearranging for spring.

I have two separate formats for my kitchen. The fall/winter arrangement allows for an easier flow of traffic when we have lots of folks around, and people come over for pot lucks and need to use the stove to heat up and serve food. The spring/summer arrangement allows me a larger prep area for when I'm making bread, ice cream, meals, and also serves as a buffet of sorts as I can lay out the two crock pots on it. Additionally, the two layouts force me to deep clean the whole room a few times a year, and keeps things from feeling stale. Someday I'd like to build a better island, as the ones I have now are sort of ad-hoc mashups of the old island. In any event, the kitchen is set up for spring and summer now.

I also finally put the last set of blinds up on our second window in the kitchen. We had gotten custom wood slat blinds as a gift a few years ago, and I had put the blinds up on the window facing the street right away. We didn't have a window frame on the other window (which faces our driveway) until recently, so I hadn't put these blinds up. The room feels somehow more empty to me now that it's "finished" but I'm sure that will change with time. I like to have the windows open, the natural light and air, so it's not as if they HAD to be up, exactly. 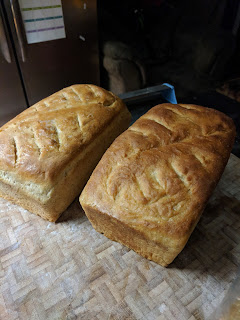 I've been baking bread again, as well. A couple of months ago I started cultivating two wild yeast starters with some wheat berries I'd milled down, and I've had a lot of luck baking with them so far. I've made sourdough chocolate pancakes, as well as about eight loaves of bread. Mostly I'm giving the bread away as I try to lose weight for the marathon, but like anything else the practice of the little skills, every repetition brings some improvement. This morning I used slices from my most recent sourdough loaves to make french toast! I only had a couple of bites, because I'm trying to eat well so I can get in shape for the marathon, but it was extremely good.

I'm craving a race, but I can't really find any in February, and also in New England. That's going to cause this month to be a real mental test for me. Not a terrible thing for me, I guess, to build some mental fortitude. Crazy to look at the race calendar on the white board in front of me. Doing spring backwards, with a 20 mile race, followed by a marathon, and then two halves going into the summer.

Speaking of self-discipline, I've done well so far staying out of stores and avoiding shopping on apps so far this year. That's a big part of my resolutions for 2018 and I'm hoping to be able to stay away from buying things more this year. I still need to get some jeans to turn into shorts for the spring, but I'm planning to do that off the clearance rack. I'm also going to be in need of running shoes at various points through the year, but I'll make it work.

On the parenting side of things. I don't post much about parenting, or link to sites, but I want to save this one here in case I want to remember it later. I spend a lot of time talking to other parents of small kids, and inevitably screen time comes up. Scary Mommy had a great article on a new book on the topic (link here). We have been limiting screens around bed time for awhile now, and we've had a lot of luck with that. The screen that my daughter most interacts with is probably the TV, but she actually would rather run around the kitchen and tear the house up, so I'm not super worried about addictive qualities. She has spent enough time with my phone that she can navigate parts of it on her own.

I don't really like that. I mean, I'm not naive to the fact that we live in a tech-centered society, and she'll definitely have a relationship with these screens throughout her life. I just want her to have a few years where they aren't super ubiquitous. They certainly feel that way in my life, and I've also been trying to take some steps to decrease my phone's power over me.

I also am developing a complex relationship with social media. I don't so much mean this blog, or the twitter, which I maintain to keep ties with the digital parenting community. This gives me an outlet, and a place to read, so I have an idea of what's normal and what's not. Ultimately the blog is just a journal, and a place to recall the comings and goings of the days.

But I'm weary of the types of social media that encourage aquiring a large number of "friends". I sort of feel that if I don't regularly interact with someone in person, the relationship is a sham. That doesn't go for all cases, of course, but it is how it feels.

I have complicated feelings on all of these things, and maybe that warrants another post.
Posted by Mike at 9:41 AM