This winter has been a slog so far. Not really in the doldrums (I don't think...) but just feels like it's taking forever to pass.

As previously mentioned, I've been baking loaves of sourdough sandwich bread. We usually go through two loaves a week (they're pretty small, no worries) so if I make more I give it away. As a thoughtful way of saying thanks, one of my coworkers went to his favorite coffee roastery and got me some ground coffee. So with an excellent cup of java, I'm sitting down to write this blog post. 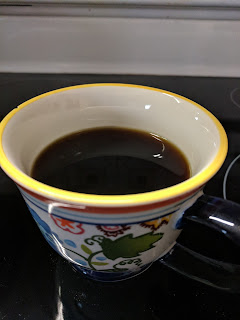 Seriously it would be amazing if people
gifting me coffee was just a regular thing.

I've been trying to slow down a bit, and stay focused on what I'm doing. To that end, I've spent a lot of time playing with the kiddo. We've been coloring with crayons, using the big sketch pad we got her, and the set of 65 crayons we got her. We haven't done much coloring yet, so it's pretty overdue that we made it a bigger part of our play at home. I'm having to find new layers of patience, because you can't expect a toddler to know that you don't color in the pages of a book, or on photos, or on other household objects.

Her crayon control is pretty decent, but we're still in a pretty abstract phase. Sometimes she'll ask me to draw something, and then I will and she'll draw over it (in an attempt to make the same shapes?) This has been fun, if trying. Like I said, new layers of my patience are emergent.

We've also been doing lots of singing and moving. I'm using some of the songs and movements that I did when I taught pre-school music, and throwing in some of her favorites from elsewhere. A real highlight is singing "They're red hot" by Robert Johnson, which she knows pretty well by now.

Race training wise, I'm a bit off my plan. Averaging three runs a week, but with a workout, easy run, and long run in there. We're only two weeks in some time yet to rebound. I've also been running the stairs in my house for cross training on days I don't run, and that's making the hills in the neighborhood feel a bit more effortless. Was actually able to run in my sandals, too, yesterday, as it was about 51 degrees. 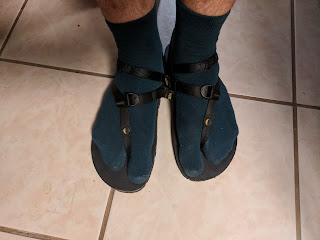 Today there's an epic amount of rain, and flood warnings in the area, so my long run may get pushed off until tomorrow. That's not really a big concern, though, as I'm confident in covering the distance, and the ability to put the time in will really just mean quality at the end of the thing. I'd prefer quality, of course, but I'm planning to have a long life with endurance sport, so I'm not going to punish myself psychologically while also trying to parent a small human.

I'm trying something new this year with regards to the weight loss thing. I had bought a smart scale for myself back at the start of the year (as one of my last purchases for the year, because of my no shopping resolution) and I've been weighing on it daily. I weigh between 530 and 7 every morning (including weekends) and I basically don't look much at the scale. I try not to think about the day's number as anything other than a part  of a bigger picture, and I've been pretty happy with the downward trend so far. I'm down about six pounds so far, and it keeps dropping (slowly, and with fluctuation). Hopefully I'll be closer to my fighting weight for the marathon in April, but in any event I feel much better when I'm out on the move.

Nutrition wise I'm eating more good fats, and attempting (although not eliminating completely) my sugars. I've been big on poached eggs with sweet potato and guacamole. I also learned how to make homemade pasta using discarded sourdough starter this week. At first I was sort of bummed about the recipe, because it's an egg noodle it takes six egg yolks to make. That's a lot of egg yolks, and I'm weary of anything that resource intense. But, oh man, once I figured out what that six yolks actually yielded.... 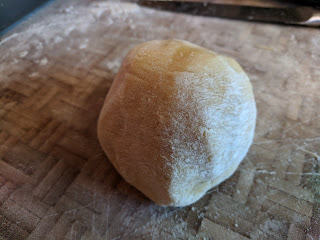 One ball of dough makes about eight servings! This whole week, I'd come home, roll out and cut the pasta, and then cook it up. For this reason it was pretty good for portion control, and also practicing my timing!

So it's a bit labor intensive, but absolutely worth it.

There's no better feeling than having cooked a meal like that from scratch, and seeing how much my daughter loves it! 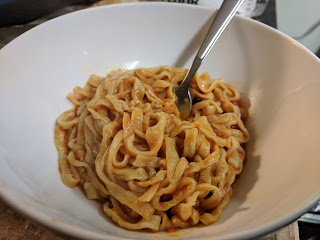 For my dinners, I'd just toss the noodles lightly in some sauce that I'd seasoned up. A couple of times I topped this with poached eggs, to pick up some extra protein.

For my wife and daughter, I tossed the noodles in a light sauce, topped with some of the leftover beef roast we had, and then topped that with more sauce.

Here's the website I based my noodles off, although I didn't have any whole wheat flour around, so I had to use all purpose. It worked out well, though.

I also made popcorn last night on the stove, using a big stock pot (link to version used here). I've never done that before but I thought it looked like a neat way to make popcorn, and saves me the trouble of having to store an air popper in my tiny little kitchen. Also, I made a pretty large volume of popcorn which was really great for our family movie night. I even seasoned mine up with some nutritional yeast, although I'm out of flora oil so I'll need to restock on that to get the vegan popcorn thing going again.

This week looks like a bunch of nice days. Maybe we'll get a zoo trip in, and hopefully I'll get more workouts in.
Posted by Mike at 11:30 AM