After New York I knew I wasn't done with this running thing. I've got a mind geared towards endurance, and I knew that the biggest challenge for me would be to return to the Eastern States.

I love the Eastern States. If you read my previous post about my history with the race, you know that. But it is logistically a big challenge, because it's not an inconsiderable distance to run, and it's also a weird gray area for racing -- not quite far enough away that I can justify renting a hotel room, but just far enough that it is a bit of a haul for such a big race.

I packed my stuff the night before, had a pretty simple dinner (I was very careful with my food this time around, not wanting to stop at all on the drive up.) I repacked my bag again. My wife unpacked and repacked my bag. I set my alarm for 4am, knowing I would want to leave a bit before 5am. Went to bed. I don't know that I had the best night's sleep, but I had a very good night's sleep two nights before the race, so I ended up waking up feeling OK.

This year for my own comfort I planned on wearing my pajamas up to Kittery and then checking everything in my gear bag. I am super happy that I did that as it kept me comfortable but also let me break up the parts of the morning. I headed out at about 445am, topped off the gas tank and picked up some last minute nutrition stuff. Drove up to Hampton, and passed through some snow squalls on the way north. Tough going at times, but I actually ended up making really good time to the high school for pickup. I packed a breakfast of poached eggs and polenta, so once I was at the high school I ate, grabbed my stuff, and got onto a shuttle.

Folks at the race were super friendly this year, and I had a lot of easy conversation about life, family, racing, and our shared history with this race. It was awesome and a great way to pass the time. Once we got up to the school in Kittery, picked up my bib and shirt for this year. I was a little disappointed that the shirts were tech fabric this year, as I love wearing my Eastern States shirts, and I just rarely wear tech shirts to work. Oh well. The new logo was pretty neat.

Checked my bag and headed to the start line shortly before 11am. I was listening to Shakespeare's Julius Caesar, because I like Shakespeare and it was one I didn't know. A couple of minutes before starting I switched over to Chris McDougall's Born to Run. I listened to that for maybe the first fifteen miles or so.

Amazed at how well I remembered the course. A bit of a headwind for the first few miles, but once we turned and were running along the coast the tail wind helped significantly. Moved along at a decent clip, and making really impressive time in the first half of the race (even coming through the 13 miles at 1:42 -- near my HM record pace.) At around 16 miles I stopped at an aid station to walk a bit. Ended up joining up with another runner and chatting all the way to the finish, coming in around 2:46:30 -- three minutes or so faster than my PR on the course. I was really thrilled at coming in at that time. 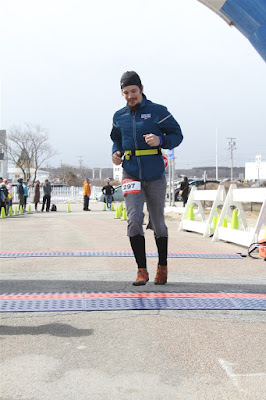 Coming in with a smile

Went to the food table, got some Gatorade, headed towards the beach. Walked out towards the beach and took some pictures, helped some others out and took photos for them. Such a feeling of elation, just so happy with how I did. Texted my wife, headed to get my gear bag from the check, and then back on the shuttle.

Wasn't a long ride on the shuttle this year, for whatever reason. I was really happy about that. I remember from previous years the traffic on the 1a bridge meant the buses sat there for awhile. That wasn't a thing this year, so maybe we spent a half hour total on the shuttle. I was really happy about that. The Eastern States remains one of the best organized races I run, the logistics are immense and the execution is just so impressive.

Once I got back to my car I still had a two hour drive home, but I had left a whole bunch of food in the car for me, so I had a blast eating on the way home and listening to tons of music. Got home and gave my daughter the medal, as is our tradition, and I still haven't gotten it back yet.

I know that conditions this year were truly ideal, but even with the tail wind helping me out, I think I'm in good enough shape to do something pretty impressive at my marathon in a couple of weeks. Did not expect to be in this place back in November, but I'm glad the work I've put in is paying off!