On Fatherhood and Running

As this blog mainly chronicles my life in endurance sports and also adventures in being a new dad, I love the intersection of the two things. I follow a number of parenting and endurance sport blogs, including the National At-home Dad Network. I'm not an at-home dad, myself, but I like the idea of it and like the group as a place to share thoughts on fatherhood. As such, I'll be participating in the Run Dad Run Virtual 5k. I'm not usually one for virtual races, but the money goes to an organization I follow frequently. I'll consider this a subscription fee, and I hope that it does manage to get some other dads out on the road who wouldn't otherwise run.

I do wish that instead of the medal, one could just receive a t-shirt. Participating in endurance events quite often, I have a lot of medals in a bin somewhere in the basement that I don't really ever look at. Big fan of shirts, though. The AHDN has a great "Dads Don't Babysit" shirt, which I love. Strongly recommend that one.

This week my wife returned to work and our daughter began her time at daycare. The daycare we have her in is extremely nice, affordable, and also used by some of my coworkers. My wife was a preschool teacher in a previous life, and this daycare checked off all of our boxes. The teachers have a great rapport with the babies, and our daughter is doing very well there. She's really strong, too, and has really been enjoying playing in the exercise saucer they have there.

We're even transitioning her into small amounts of food -- starting with rice cereal. Just so she can practice taking it off the spoon, my wife says. These little developmental breakthroughs remind one to savor this time, because she isn't going to be little forever. I am foreseeing many days of me chasing this little one around the yard, trying hard to keep up.

These last few months have been very difficult, but I'm happy for the gift of such a great family and for the gift of movement. I haven't run at all since Big Sur, and I'm looking forward to getting in 5k today. I'm so happy to see my daughter thriving and doing so well, becoming so strong. I'll have quite a bit to think about during my ramble today.

I've had some poison oak on my ankles (nothing terrible, just mildly annoying) from a ramble through Nisene Marks State Park while I was out in California. I may end up barefooting today, if only to avoid irritating the poison oak rash more.

I'll post some from my run later. I hope you get outside today and have an adventure! 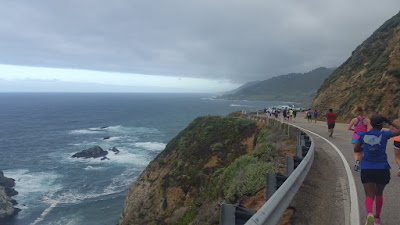